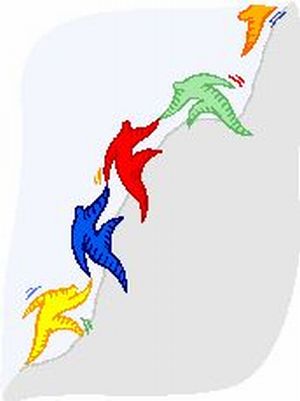 I never really knew what I wanted to do as a kid growing up. I didn’t figure that out until I was in my 4os. Some have called me a late bloomer, others have told me that I had my head up my arse. But there’s one thing I did know: I knew what I didn’t want to do.

I’ve worked in a cafeteria line, drove cattle on a ranch, sold books door to door, pitched insurance, tried Amway, did my time in retail stores as a “shoe dog” and suit salesman, did tech support for a big software company, and shuffled papers as an administrative assistant.

In every case, I was always looking for the next gig because this one wasn’t good enough.  In every case, except for my current job, I got bored, or pissed off, or lazy, and I moved on. This decision was rarely made with clarity, and there was always confusion as to whether I was making the right move or just being stupid.

But looking back, I can see that I had the opportunity to make a difference in every one of those jobs. At times I did. Most of the time, though, I was too wrapped up in my own problems and issues to think about what I could contribute.

One day while I was selling clothing for a major retail store,  an elderly woman came in looking for a suit for her husband. I asked the usual questions: size, color, price, what he was going to use it for. “We are going to bury him in it.” she replied with a sigh. For a moment I was speechless, then I felt a tinge of annoyance. Why did I have to get this customer? It was going to take more time, and as a commission salesperson, time was money. Truth was, I didn’t want to let myself feel for her and her situation.

Immediately I felt a sense of shame, coupled with compassion. This woman was going to lose her life’s partner and needed my help to dress her husband for his burial. I stopped thinking about myself and gave her the time and attention she needed.

After two hours, we had picked out a suit, a shirt, a tie, and some shoes. After ringing it all up, I helped carry her purchases to her car. “Thank you so much”, she said, offering me a five dollar bill. I saw tears in her eyes and mumbled “You’re welcome.” I waved away the five dollar bill and walked away before I started crying myself.

I made a difference that day,  not by anything I did, but in who I was being: compassionate, understanding,  and generous with my time. Believe it to not, a few months later a guy came in looking for a suit to wear to his own funeral.

You may not be doing what you feel is your life’s work. You may think that what you are doing doesn’t really matter. Truth be told, in the scheme of things, maybe it doesn’t. But what does matter is what you bring to what you do. It’s who you choose to be that makes the difference, not so much what you do.

Sometimes all that is needed is a change of perspective. As a clothing salesmen, I saw suits as costumes; saw fashion as trivial. Consequently, I felt that my job was trivial. What I failed to see was how a man felt once he was put into a beautiful tailored suit or sportcoat with a shirt and tie that matched. A young punk could walk in with pants hanging so low that his underwear showed, but could walk out as a well dressed man.

I saw myself as a salesman, but if I had been able to see myself as someone who helped people feel better about themselves, that would have made a difference in how I felt about the job. Maybe it would have changed from being a grind to being an opportunity.

Learn to Love the Fool in You

Hypnosis and the Olympics
Scroll to top