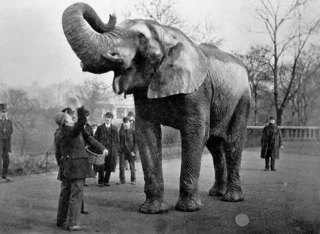 One day a man was strolling through the circus. As he passed by the elephants, he noticed that the only thing that prevented these huge animals   from running away was a small chain attached to a collar around their leg. The chain was tied to a little peg hammered into the ground. The man thought to himself “Surely, that small peg can be easily pulled out by this 10 foot high creature. Is this safe?”

“Yes, it is safe” the trainer replied. “When the elephants are babies, they are tied in the same way except using a metal stake deep in the ground. This is enough to hold the baby elephants. Tempted by the world outside, they try to break free again and again, but the chain pulls them back and inflicts pain on their legs. They learn that any effort to escape is futile, and they soon give up trying altogether.”

The trainer continued “Now, as a big elephant, it remembers the pain it felt as a baby. It remembers that as hard as it tries, it cannot break free and can only go so far as the chain will allow. It has long given up trying to escape, so we need only secure it with a small peg in the ground. It does not matter that this elephant stands 10 feet high, weighs 14,00o pounds, and can easily pull the peg out and trample both of us. The memory of its limitation prevails.”

The man walked away shaking his head. One of the world’s strongest animals, able to uproot trees and destroy villages, held captive by a skinny chain and a small wooden peg.

The parable of this story is obvious. As human beings, we are often no smarter than elephants.

We believe in limitations that keep us prisoners. We hold painful memories that keep us taking risks. Because we have failed once or twice, we have stopped even trying.

You have to cut elephants some slack. As big as they are, their brainpower doesn’t even compare to what we have under our hood. We should know better.

But we often don’t. We treat our self imposed limitations as truth. But they are not truths. They are simply beliefs about what is possible for us. And your beliefs can change. Now. Today.

After ten years in private practice as a hypnotherapist, I’m still amazed by the power of belief and it’s ability to bind us or set us free.

I’ll be examining the power of belief in the next few posts. I’d like to hear about how your beliefs occur to you and how your beliefs have changed if at all. I invite you to step back and see your beliefs as beliefs instead of truth and what impact they have on your life. Please share your thoughts in the comment section.

The #1 Thing Holding You Back from Success

The Most Important Thing
Scroll to top