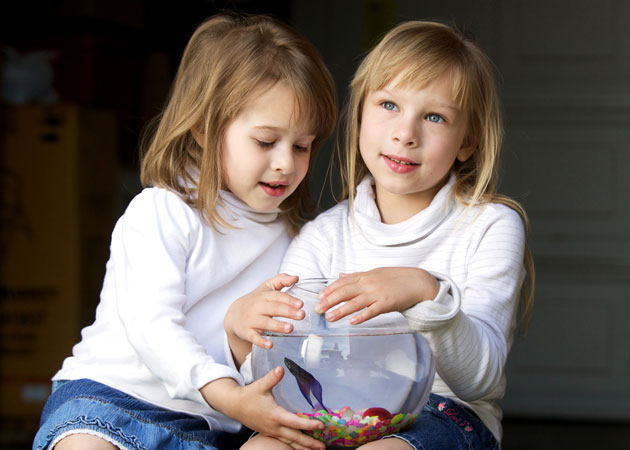 The Rock, Hauber the Fish, and Chick

I’ve been a father now for five and half years. I have two daughters that I  refer to as Chick and the Rock. Two days a week I’m a stay home dad. I’ll say this much, life is interesting.

For most of my life I had no interest in being a father.  Then in 1998 I was watching a Star Trek Next Generation movie where Picard is experiencing some alternate reality where he has kids. I thought to myself “That looks kinda cool” and became open to the possibility. I recently saw that movie again but couldn’t recapture the cool feeling. All I could think of was how cool it would be to be Picard, you know, in his regular life, going where no one has gone before, maybe someplace nice and quiet…

Being a father is a humbling experience. Changing poopy diapers, cleaning spit up, wiping butts; a part of me feels good about doing all that but a much greater part of me says “Glad I’m done with that s__t!” I heard my mother say once that my father never changed a dirty diaper. Hard to get away with that these days. Still, I remember my dad laying down next to me in bed and rubbing my tummy after I ate some green apricots off our tree.

My father was king of the castle. I fall somewhere between servant and court jester. When the Rock shouts out “Juice please!” I’m aghast to find that my response is to leap up before I catch myself and correct her: “May I have some juice please?” Luckily, I’m starting to turn the tables in my favor with the oldest. I have her bringing me this and that now; she is learning to help out. It’s only a matter of time before I have her cooking for me and the wife…

Most of all I find myself being educated, learning things about myself that I’ve come to accept grudgingly. Here’s what I’ve learned from being a father.

I’m not as sharp as I thought I was. The Rock got into bed with me and my wife sometime last night and spent the night kicking me in the head. I woke up with her foot smashed against my face. Her eyes were closed but she was smiling. I gave her back some of her own medicine, shoving her with my foot and laying my leg on top of her. “Daddy stop” she whined. “Ted knock it off, she’s still asleep,” my wife snapped at me. Rock’s smile got bigger. Damn, outsmarted again by a four year old.

I’m not as brave as a thought I was. The day my kids were born were the most terrifying of my life. Never mind that humans have been having kids for millions of years. One came out too early, the other didn’t want to come out and  my wife couldn’t wait for it all to be over. The day after the birth of the first one, 5 weeks early, fate smiled on me, and I went home to hide in bed with the flu.

I’m not as patient as I thought I was. I’ll be on the computer reading a really good article or watching a great You Tube video, or trying to get a blog post out, and the Rock will come up and whine “Chick just touched my Barbie!” What I want to say is “I don’t give a crap about Barbie, beat it kid.” What I really say is “Oh, well, can you share it with her, sweetheart?” (between clenched teeth.)

I’m not as sensitive as I thought I was. The female energy in my house can be overpowering. I’ve always gotten along well with woman, able to relate to women stuff, which comes in handy being a hypnotherapist. I can tie a ponytail, paint fingernails, and draw hearts, mermaids and flowers.  But when I feel myself saying things to my kids like “Tough, deal with it”, “Suck it up”, or “And now, you must suffer”, I know it’s time to go hang out with some gnarly dudes and some beers.

I’m not as mature as I thought I was. Sometimes I spend more time watching SpongeBob SquarePants than I should. I have recently played with Barbies, as well as Dora the Explorer. I want to dress up like DJ Lance of Yo Gabba Gabba for Halloween. I can sing the theme song to Caillou. Just a few days ago, I licked my dirty sock just to gross my kids and wife out. I can’t believe I’m actually telling you this.

I’m not as tough as I thought I was. I can spend all day mowing the lawn, edging, weeding, trimming the hedges, fertilizing the roses, and planting flowers, but I’m tuckered out after only five minutes of Tickle Spider or Little Pony (where I am the pony).

But the most important thing that I have learned as a dad, is that I’m not as selfish as I thought I was. I recently went to my kid’s Kindergarten father-daughter dance, under protest. I actually danced to “Play That Funky Music  White Boy” with my five year old. She was beaming from ear to ear. No matter how late I’m going to bed, I’ll check and make sure they’re covered up. If they’re sick, I’ll get up in the middle of the night to check on them.

It’s true that most of the time, their needs and wants come before mine. But the way they greet me at the door when I get home, makes it worth it, all the things I do as a dad. It’s not something I have to do, it’s something I get to do.

Happy Fathers Day to all those dads out there, it’s a tough job, but only you can do it.

29 Cool Ways to Welcome and Celebrate Summer
Scroll to top